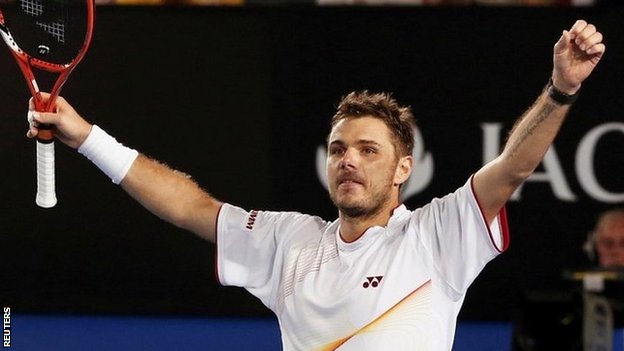 Stanislas Wawrinka held his nerve to win an epic five-set battle with Novak Djokovic on Tuesday night in Melbourne, prevailing 2-6, 6-4, 6-2, 3-6, 9-7 to reach his first Australian Open semi-final and end the Serb’s three-year reign Down Under.

“I’m really happy. I’m excited,” said Wawrinka. “It was more or less the same feeling as during the match last year. The beginning was not that easy, but then I started to play really well. It was important to stay with me. After losing two times against him in Grand Slam in five sets, I’m really happy to take that one.  It’s great for me.”

“I had to stay really aggressive,” said Wawrinka. “I had to push him a lot, because to be ahead in the score, it’s always an advantage, especially here [in Melbourne] where the courts are fast and with the windy conditions.”

“He served extremely well from the beginning to the end,” said Djokovic. “Every time he was in trouble, he was coming up with big serves. He took his opportunities. He deserved this win today. I congratulate him absolutely. There is nothing I can say. I gave it my best. I gave it all. I tried to come out as the winner. I tried to fight till the last point as I did in a very similar match we did last year fourth round, same court. But it wasn’t to be this time.”

VIDEO Federer Falls On Back But Makes Shot – Halle 2015