In this Episode, we recap a very forgettable year for tennis and discuss some of the fun virtual events that have been put on as well as the very entertaining Tennis media options that have come to life during this Tennis at Home era. Some of the highlights are the Tennis United Show, Instragram interviews, the UTR interviews, USTA interviews and so much more.  We discuss Roger Federer, Rafael Nadal, and many pros who have tried to keep themselves busy and fit.   Our Fan Favorite Reporters discuss their heroes include a report on Maria Sharapova’s retirement, Stefano Tsitsipas’ practice jokes, Serena Williams motherhood and much more.

Tennis courts are open again for singles – Valerie and I played tennis together for the first time in a couple years!  We played safe singles in La Puente, CA!  It was a blast to play and such a relief to get back on the court!  Would love to hear your stories about returning to the court!

I am working on a guide for Tennis Yoga with Marcia Gray from our last podcast and hope to have that available for people to purchase this summer.  Check out this awesome picture of her as a preview of the upcoming Tennis Yoga book.  Stay tuned for news about the release this summer.

We are recording this in the Aftermath of the George Floyd death and the Los Angeles Curfew that has shut down the city for a day to help police determine who is protesting peacefully and who is engaged in criminal behavior.  Gosh 2020 has really been a hard year!  We started the year with the Australian Fires that impacted our Aus Open but still allowed it to proceed.

Parasite won best picture of the year?? That should have been a warning sign of the apocalypse

Indian Wells cancelled MARCH 8 – 21, 2021 what a heart break for us cali kids that love the BNP Paribas Open in our backyard!

During the cancellation what has happened?

The Bryans were supposed to have their farewell tour but had to put it on hold and are re-evaluating if they should bow out gracefully or try again to retire in 2021.

Stacey Allaster, the USTA’s chief executive for pro tennis, said if the board decides to go forward with the US Open, she expects it to be held in New York and in its usual spot on the calendar. An announcement should come from “mid-June to end of June.”

The world No. 27 is accused of “violence against a family member committed in the presence of a minor” and was released on bail Sunday in his native Georgia.  The 28-year-old was arrested Friday after Neka Dorokashvili reported being “physically assaulted” by her ex-husband. Their five-year-old son Lukas reportedly witnessed the alleged incident.

Fabio Fognini has arthroscopic surgery on both ankles : The 2011 French Open quarterfinalist, who reached a career-high No. 9 in the ATP rankings last year, posted two messages on Twitter. The first announced he would have the operations, and the second included a photo of him in a hospital bed

Nadal and Federer on Instagram was the highlight of my tennis year with other players like Andy Murray and Stan Wawrinka trolling and laughing in the comments! 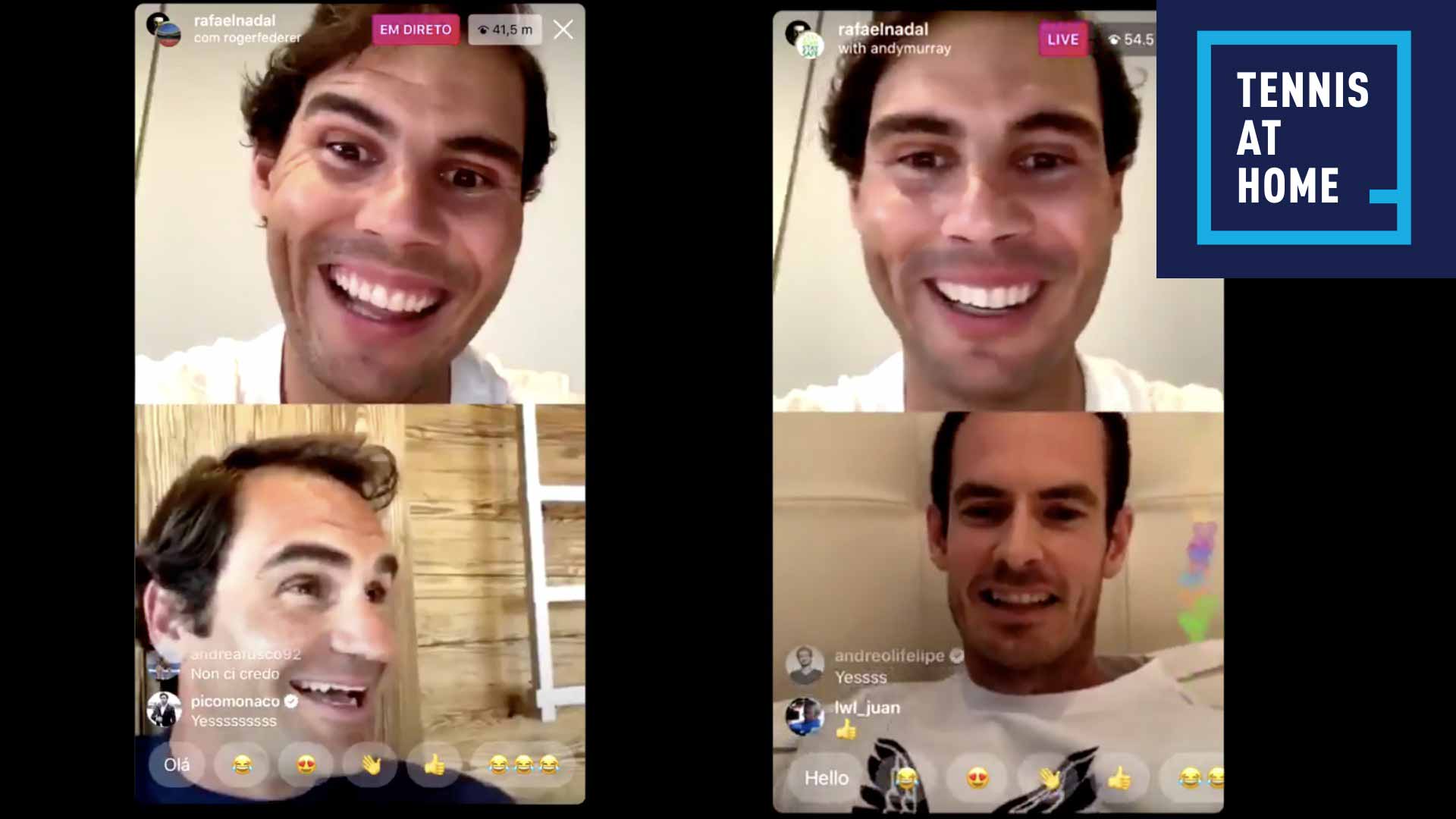 Djokovic on Instagram had a couple of really great guests:  Wawarinka, Maria Sharapova, his guru,

World number one Novak Djokovic has come under heavy criticism after claiming that people can change the chemical make-up of food and water throughout mindfulness.

Djokovic has made headlines throughout the shutdown, reaffirming his disapproval of vaccinations and revealed that he would need to consider his options if it was compulsory in order to play tennis again. However, his latest claims have caused major backlash, believing that people could change the molecular composition of food and water with positive thoughts.

Here he is in his own words.

“Because water reacts and scientists have proven that, that molecules in the water react to our emotions, to what is being said.

“I truly believe that we should continuously, every single day that when we sit, we sit without cameras, without phones … or even worse having nervous discussions and conflictual (sic) discussions at the table with your close ones during your meal.”

446,991 views on instagram tuned into this and wacky broadcast that really stretched the limits of science and common sense.  He also claimed that arguments whilst eating could cause the food to lose nutrition.

“They saw if you had specific thoughts, specific emotions onto the water, if they were happy thoughts, if they were good thoughts, they created a molecular structure that had a geo-prism based on sacred geometry meaning there was symmetry and balance,” he said.

“On the opposite end when you give water pain, fear, frustration, anger, that water will break apart.” Quoted and mispronounced his name masaru Emoto pseudo scientistic that was never proven by science.

The Ultimate Tennis Showdown will attempt to encourage players to come out of their shells and show their personalities when it begins play next month.

The UTS has received approval from health officials in France to start play June 13-14 and will hold events over five consecutive weekends at the Mouratoglou Academy in Nice.

Mario Tennis event – Stay at Home Slam  was a ton of fun!