Gigi Fernández won 17 Grand Slam doubles titles and two Olympic gold medals representing the United States, and reached the world No. 1 ranking in women’s doubles. She reached a career-high singles ranking of 17 in 1991. Since retiring from the professional tour in 1997 at the age of 33.  We catch up with Ms. Fernández at Indian Wells Tennis Center during the BNP Paribas Open.  This interview is courtesy of the USTA.

Fernández represented the United States at the Olympic Games in 1992 (Barcelona) and 1996 (Atlanta)  She teamed with Mary Joe Fernández (no relation) to win the women’s doubles gold medal on both occasions.  The first gold medal was won against the home team of Conchita Martínez and Arantxa Sánchez Vicario with the king and queen of Spain in the audience. The two medals are on Fernández’s desk, and a license plate on her car states “DBL GLD”

She won 14 of her 17 Grand Slam titles partnering Natasha Zvereva; their partnership is the second most successful doubles pair in the Open era after Martina Navratilova and Pam Shriver.[4]

Fernández has been a tennis coach and entrepreneur. She has coached players including the former world No. 1 doubles player Rennae Stubbs, Lisa Raymond, and Samantha Stosur. She coached Sam Stosur to her first Grand Slam title at the 2005 US Open with Lisa Raymond. She also coached for the Puerto Rican national team and the University of South Florida. She now shares her knowledge of doubles with tennis enthusiasts throughout the US by conducting Master Doubles with Gigi Clinics and Doubles Boot Camps.

She is the mother of twins, Karson Xavier and Madison Jane, and the partner of retired professional golfer and former LPGA and WWE executive Jane Geddes.[9]  This is a real sports power couple!

Our interview today comes courtesy of USTA Diversity and Inclusion Committee.  Many thanks to Lorena Martin Esther Hendershott for making this possible.

Connection to Hollywood.  Her cousin José Ferrer was a famous Puerto Rican actor and director.  Ferrer was the first Hispanic to receive an Academy award.  Ferrer was married to famous Actor Rosemary Clooney and the uncle of George Clooney!

TennisPAL Chronicles is a tennis podcast to feed your passion for the game! We are tennis fans that interview tennis professionals and discuss tips, news, and reviews for your tennis obsession. Our global Fan Favorite reports are created by passionate fans who share news about their favorite players. Host Phillip Kim is the Tennis Pro at the historic Langham Huntington in Pasadena as well as the Director of Tennis for the City of Azusa and an avid player and coach.  Visit tennispal.com to download the tennis app everyone is talking about and access the show notes!  Send an email to pk@tennispal.com for more information. Download from iTunes here Thanks for recommending and listening! 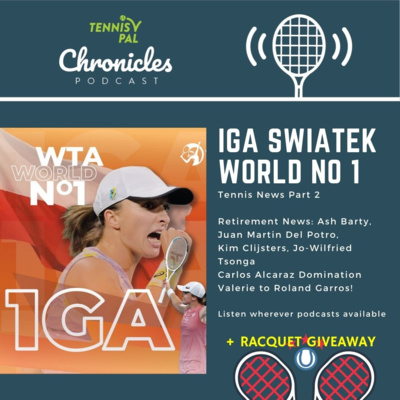